#4 is down in the books. It was my real last half of the season because like I mentioned in my last post, I hate the cold. I am doing a turkey trot 5k with my friend Vanessa, but I’ll bundle up.

Let’s get down to the nitty gritty of the race. I woke up at 6:15 bright eyed and bushy tailed because to me, anything past 6am is not too early. Dressed in my borrowed bumble bee costume and waited in my car for Amanda. Hmm, she just called and said she was outside, but no one was outside. . . I quickly call her back and tell her she’s at the wrong house and don’t try and walk in(I had told her to just walk in to my house). Whew, luckily she didn’t but was just about to! haha oh Amanda. Moving on, we finally met up, picked up Lindsay and were on the road to Salt Lake City Capitol building by 7am. Found parking super easy, used the bathroom and waited about a half hour for a bus to shuttle us to the start (6 miles up Emigration Canyon).

Can I just say what a beautiful morning it was? Seriously! The canyon was gorgeous, and although it was a bit chilly, it warmed up quite a bit throughout the course. I was really hot in my long sleeve. Luckily, a very kind bus driver let us sit on his heated bus until the start, heaven sent! Ate half a banana and then it was go time.

Flew by. Lindsay and I chatted away and took in the beautiful houses, canyon, and weather. (Amanda cruised on ahead after mile 1, she’s a rockstar).

No seriously, she was an 80’s rockstar 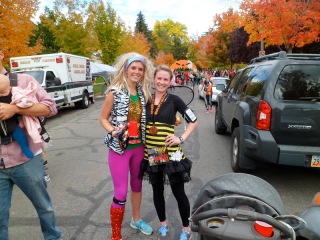 Again, they really just flew by. We were chuggin along, had a great pace. No worries. Until..

HILLS! There were exactly 5, yes I counted them, hills that were steep, hard hills. They just wouldn’t quit. At mile 10 Lindsay stopped to stretch and she politely told me to continue on. Luckily, the hills decided to stop*note to self* read the fine print of the race course,sheesh.

Felt great, picked up the speed and realized if I really pushed it I could beat my time of 1:53. So I kept pushing it and then I came upon a car? There was a car in the middle of the race just driving along at like 2 mph. what? really? There wasn’t much race support, road blocks, or anything so that was pretty annoying. Luckily I found a way to squeeze by and move on.

It was downhill so I just started to sprint. By the last yard to the finish my legs felt like complete jello and I was worried I’d trip. I didn’t. I beat my time by 1 minute! A min is a min to me. I’m so glad I could end my race season on a high note. I felt really good after and just really enjoyed the race!

The race itself: the aid stations were great, had enough water, gatorade, gu’s. But the website said there would be fun activities like bobbing for apples, a donut eating contest, etc. There were no such things. No zombies chasing us, and they promised a big party at the finish with delicious grub. Nope, not even a water bottle. You had to pour your own water that was quickly running out. I didn’t even get any free candy or granola bars. All they had left were animal crackers and apples, really? VERY poorly done(there were still so many more runners to come and the water was practically gone when I got there).

But I loved dressing up, being with friends, and it was a great race for me. Hopefully next year it’ll get better.

Welcome to the Sugar Plum Runner! I grew up in WA state, but currently reside in UT with my husband Josh, son Jackson, and 2 daughters Lily and Claire. I love running, but I have never been so inspired to run, race, and blog about it since 4 years ago after I had Jackson. I grew up playing soccer and cheered in high school. My favorite part of both sports(and yes I consider cheer leading a sport) was the conditioning. I found myself running after practice was over on my own. That's when I realized that running may be the sport I really loved.
View all posts by Sugar Plum Runner →
This entry was posted in Races. Bookmark the permalink.

1 Response to The Haunted Half