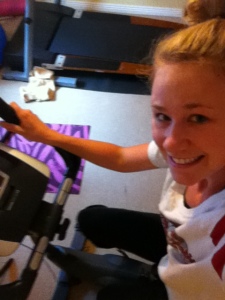 J thought he’d run on the treadmill since mom can’t, thanks bud.

So here’s what we’ve been up to this week:

We’ve been hanging out with friends/family that we missed while we were in FL. J’s cute friend Elsie(they hold hands to church class=)) broke her leg jumping on a trampoline. She is so funny crawling everywhere and is such a champ!

J sneaking snuggles with his baby cousin while having a play date with his other cousin Cal.

The other night I went swimming as a leader for the young women in my church. It was such a fun night and it was beautiful!

Last night we went to Scheel’s a sporting store to get Josh some triathlon shorts. They have all these different places to take pictures with animals but J was terrified and would only take a picture in the Jeep. Then we had ice cream, copious amounts of ice cream. I think you all know what has replaced my running. . . 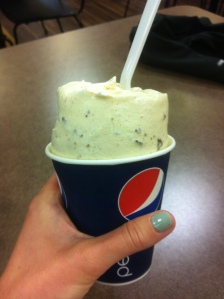 What is your favorite shake flavor?

I love anything peanut butter so I went with a Reese’s shake.

Have you ever broke a bone and had to have a cast?

Welcome to the Sugar Plum Runner! I grew up in WA state, but currently reside in UT with my husband Josh, son Jackson, and 2 daughters Lily and Claire. I love running, but I have never been so inspired to run, race, and blog about it since 4 years ago after I had Jackson. I grew up playing soccer and cheered in high school. My favorite part of both sports(and yes I consider cheer leading a sport) was the conditioning. I found myself running after practice was over on my own. That's when I realized that running may be the sport I really loved.
View all posts by Sugar Plum Runner →
This entry was posted in Uncategorized and tagged bike workout, life. Bookmark the permalink.