Sprint Triathlon Recap and the weekend

This weekend has been so much fun! My husband Josh ran his first race, a sprint triathlon.

He and little J have been my biggest supporters during all my running and races the past couple of years. Now that I’m taking a break(ahem, injury) I can’t think of a better way to not run than to watch my own husband push himself.

Let’s back up a bit. My husband doesn’t like running, and has never swam competitively. He loves mountain biking on all the trails behind our house. He wanted to sign up for something that would give him more direction and goals while biking when he saw the sprint tri and signed up. 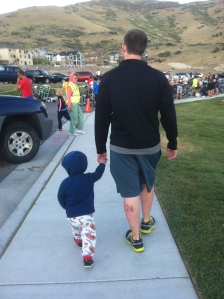 Saturday morning we all headed over to the swim start. Josh was a bit nervous but it was such a beautiful morning. He just wanted to get started.

the reservoir he would swim in

He did great on the swim and only got hit with arms a couple of times. He heard horror stories of being swam over so it was a relief.

The transition went well and he was off on his bike! Unfortunately, he used his mountain bike and he said it was killer! Way to heavy for a road race, but he still did great.

Another transition went well, but he said he was pretty tired. Luckily the run is only 3.1 miles so he came into the finish in no time. I’m so proud of him! Tri’s are such a fun spectator sport. I love running to the transitions with J and getting to scream and cheer for him through all the different parts of the race.

And his metal is huge! I’m secretly plotting the next tri or race we can do together;) 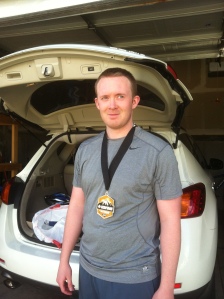 The rest of the weekend was spent with family. Josh’s cousin’s little girl turned 1!

the horse he wouldn’t get off of, but took bday girl for a ride 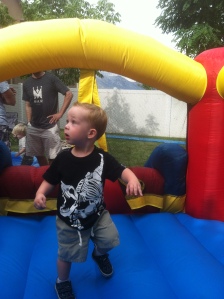 Church today, and a nice relaxing evening is on the agenda. Love Sundays=)

ever been in a triathlon or cheered at one?

Welcome to the Sugar Plum Runner! I grew up in WA state, but currently reside in UT with my husband Josh, son Jackson, and 2 daughters Lily and Claire. I love running, but I have never been so inspired to run, race, and blog about it since 4 years ago after I had Jackson. I grew up playing soccer and cheered in high school. My favorite part of both sports(and yes I consider cheer leading a sport) was the conditioning. I found myself running after practice was over on my own. That's when I realized that running may be the sport I really loved.
View all posts by Sugar Plum Runner →
This entry was posted in Races and tagged husband races, sprint triathlon, weekend recap. Bookmark the permalink.

9 Responses to Sprint Triathlon Recap and the weekend